Another world, right here at home

Yes, I like to travel to lands that are usually far away, uncomfortable in a multitude of ways, and reasonably safe so I can take pretty photos and share them. This much is known. However, I have recently decided to make an effort at seeing some things in my own city so I’m not one of those people that insists that a subject must be exotic to be beautiful. This is a trait I very much dislike; when a person regards themselves a travel photographer but refuses to turn their camera homeward bound. So, in an effort to be a better, less hypocritical person, I paid a little visit to the Dallas World Aquarium! (Rough day at the office, I know.)

The Dallas World Aquarium is actually more like small zoo of sorts that also has aquariums in it and is right in the middle of downtown. I knew from a quick scan of their website that they had some birds and stuff, but I did not expect to be wondering where the aquariums were an hour after wandering around. (Hint: they are at the end. They are there. Patience, grasshoppa’.) There are some pretty amazing animals to see and the foliage and exhibit is actually so nice you almost don’t feel bad for the animals being all cooped up in pretend nature. (At least until you get to the panther cage; when I went I saw it practically trying to work out an escape route, but apparently it’s a temporary thing and they change the cats out or something so don’t feel too bad for the panther.) All in all, it was fun, even if you have kids. Or even if you don’t have kids. You know, wherever your priority lays. If you don’t have kids and are annoyed by other people’s or if you do have kids and are annoyed by your own, don’t worry, they sell booze. I would definitely go back at some point, especially if I find myself entertaining any kiddos or just to take an afternoon during their slow time to soak in some peace (it’s very peaceful when it’s not crowded). Here are a few photos I took of our afternoon at the aquarium. 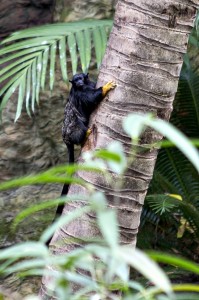 I think this is a type of squirrel monkey, but if anyone out there knows exactly please let me know. He’s so cute, with his little orange hands that look like tiny rubber gloves! No dishpan hands on this primate. 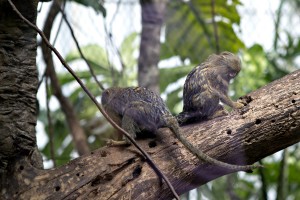 These little guys were also pretty cute, mostly because they were so tiny, about the size of rats. Hence the new nickname, “Rat Monkeys.” 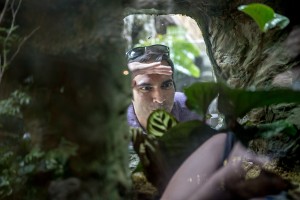 This is my friend Josh, trying to find the super giant tarantula thing promised us on the placard. He looks quite enthusiastic, but that’s because he is a good actor. There is actually no spider of ginormous proportions to be found. Maybe it was tired of all the leering faces at its window. 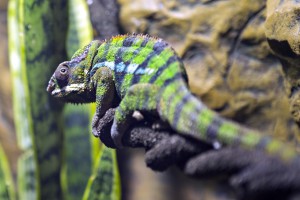 Yes, this picture is out of focus. It was dark in there, so sue me. These things happen sometimes. But look at his eyeball! It’s turned almost completely around, even though his head is forward! He doesn’t even NEED eyes in the back of his head to keep his eye on you!

Children almost always make animal pictures better. This is the coveted manatee, the gentle giant of the deep. In case you didn’t know, it’s really hard to color correct an image with things both in and out of really blue water. 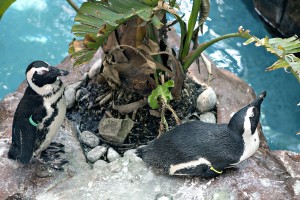 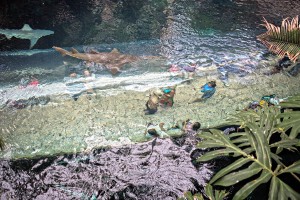 Yes, the Dallas World Aquarium has one of those tanks in an arch so you can walk underneath the sharks. What you don’t realize is that there are people above you that can see you.

I will note in closing that it’s a little pricey (I think it was about $26 to get in) and that the facility is actually completely independently owned so there is no reciprocation if you have a membership to something else. (If you have no idea what I’m talking about, then in other words, there’s never any discounts so don’t ask because the lady behind the window will kind of make fun of you.) It’s also worth nothing that the restaurant right next door, Zenna, is a Thai/sushi place that has really really cheap happy hour specials.