Last May I went to Namibia with my husband, his brother, and our friend Scott. My husband and his brother had booked a hunting trip, so naturally me and Scott headed off on our own for a spell at first. While our destination in heading south was to Kolmanskop (more on that later), that was about a 9 hour drive from Windhoek where we started so we needed a cool place to stop over for a night, especially considering we were advised to not drive at night. (Apparently the animals just can’t resist jumping in front of oncoming headlights. They are like giant, horned moths.) At just over half way, outside of a town called Keetmanshoop, is the Quiver Tree Forest, one of the largest stands of quiver trees in the nation. 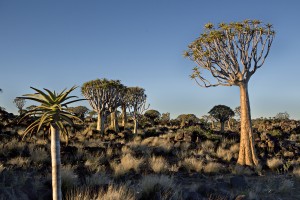 The Quiver Tree Forest is a pretty surreal landscape, especially when you have just flown some 40 odd hours and are still jetlagged, have driven on the wrong side of the road for 5 hours and then come upon this place full of aloe trees with glittering bark and rat-like animals that are more closely related to an elephant than a rodent. Surreal indeed, and quite stunning at sunset (which was the perfect time to visit). The quiver trees themselves are literally aloe plants that grow on trees. They call them quiver trees because back in the day, the bushmen would hollow out the branches to make quivers for their arrows. Their bark crackles and splits, not unlike a crepe myrtle, except that it has this gold, glittering quality about that I just couldn’t get enough of once I noticed it. 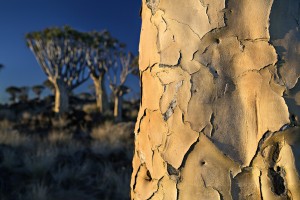 The whole landscape kind of made me think of Dr. Suess, especially when we came upon a curious creature called the hyrax. (I like to think he speaks for the quiver trees! You know, Lorax… okay you get it.) This strange little animal likes to sun itself on the rocks at sunset. I first noticed it, however, by its clucking tweet/scream. I was originally looking for a bird making the noise and then noticed it was the hyrax. It screams so loudly and so hard that I actually saw one of them choke on itself while doing it. 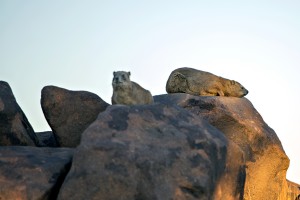 Luckily we were able to stay within the park because A) we weren’t traveling during high season and B) for an extra $50 for the whole two weeks we fashioned a tent/mattress situation on top of our 4×4. A  little note about camping in Namibia; it is ubiquitous, as are the car-top tents, extremely easy and extremely popular. There are campsites littering the countryside and outside of all of the cities, including Windhoek, and they are all pretty nice and most of them even have electricity for those traveling with a camper type thing. Since we weren’t planning on camping for the whole trip, we decided not to get a kitchen kit because it included things that we thought were nonsense like utensils, a table and chairs, dishes, and a little camp stove of sorts. Cut to us at our campsite, sitting on a sarong I had brought with me (because we didn’t want to get our towels or anything else dirty), and eating peanut butter sandwiches we made with napkins and this hunting knife thing. Oh yeah, and then there was the vodka and sprite in paper cups. You know, it’s pretty wildly amazing that neither of us fell off that damn roof tent trying to get to the bathroom in the middle of the night after getting so ridiculously schnockered because we didn’t really bring anything with us for entertainment except a bottle of vodka. 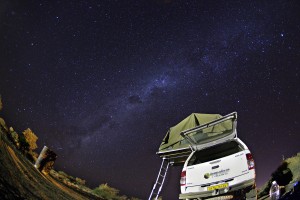 So as we were chewing the fat, I found out that my travel mate had never seen the milky way. It was at this point that I got all excited and went to get my tripod, which I usually don’t travel with, only to realize the stinking screw plate did not make it to Namibia with us. Grrrr. So, after some kicking and screaming and profanities, and being the resourceful photog that I am, above is a photo of the milky way and the 4×4 with tent. Despite the fact that my camera is basically laying on and propped up with various pieces of luggage, I think the photo came out A-OK.

To see all my photos from Namibia, head on over to my Flickr page.