“≠Xáí o” is “hello” in the language of the Ju/’hoansi San people. (Think “The Gods Must Be Crazy”.) The San people are of the Kalahari in eastern Namibia, Botswana and I think a touch of South Africa. We visited a living museum of this particular San tribe just outside of Grootfontein, and let me tell you these people are pretty awesome. To start, the people in the images do not actually live like this anymore. This is a living history museum, meaning the old traditions are pretty much just carried down for tourists these days. However, the preservation of the culture is important in my opinion, regardless of whether or not they still walk the walk. They do, however, still talk the talk, and their  language is one of the more distinctive areas of their culture as they incorporate click sounds. 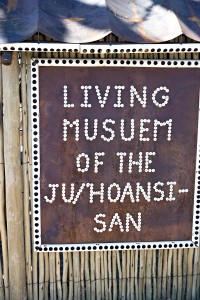 Visiting the museum was a pretty easy affair, except for the fact that you really just kind of show up (no appointments necessary) and they take care of you, and we weren’t really used to that. When we arrived the villagers quickly started to scuttle around (which we later realized was to change into their traditional dress of loincloths and beads). We followed the signs to the “reception area,” which was really just a tree with a laminated piece of paper on it and a menu of the different things we could experience. Activities included everything from a few hours of instruction in bead and weapon making and how to start a fire by hand to overnight camping including nature walks and dance lessons. We went for the fire and weapon making as we really only had a few hours to hang out. 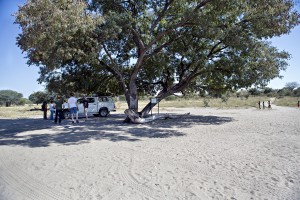 This is the reception area.

We quickly met our translator and then were redirected to the parking area. Our translator met back up with us, now wearing the traditional garb, namely a loincloth. “Loincloth” is a loose term, as it doesn’t always completely cover the “loins” per se. (When we first met him he was in shorts and a t-shirt; so of course suddenly that makes the scant clothing a little awkward.) As the villagers started explaining some of their traditions, I was astounded at how engaging and genuinely excited they were to be sharing their way of life, out dated and no longer in use as it may be. They were so charming, sweet and peaceful that it made me wonder how there were ever attempts at their eradication or how anybody could have considered them “wild game” (which was apparently the case as late as 1920).

They showed us their approach to making fire by essentially “rubbing two sticks together.” They used the method where you have a plank of wood with a notch carved into it and then a stick that you rub together with your hands. Typically when you see this performed on survivor shows and the like one person holds the plank and the other spins. These awesome-sauce dudes, however, used a little more of a team effort. One guy held the plank in place and they took turns spinning the stick so that it kept moving at an even pace despite any tiring. Very streamlined. After the lesson in fire making we went on a very short nature walk where we cut down branches for the men to make bows and arrows out of, and I was then shuffled to jewelry making with the ladies. There wasn’t much to it, it was mostly grinding holes in tiny circles of ostrich shells, but it was cathartic nonetheless and I still actually wear the little bracelet I helped to make on occasion. 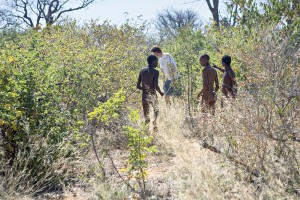 This is JP looking for his lost arrows with some of the San dudes.

Visiting these gentle people kind of gave me a bit of appreciation for the sort of hunter-gatherer (“paleo,” if you will) roots engrained in all of us. This is how humanity existed until the invention of agriculture. After our lessons it was time for games and singing and dancing. 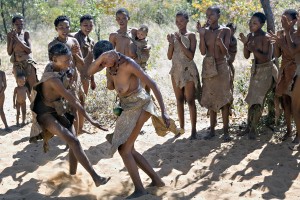 while singing and dancing. The game is over when a man

comes by and can swipe it away. 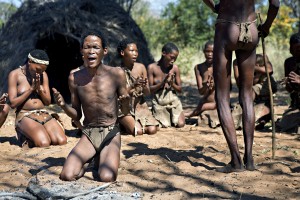 We clearly didn’t understand what they were singing about, but we definitely got the general spirit of it all.

I think this is as good a place as any to bring up a little mention of race relations in Namibia. While the San people do their thing and are now more protected then fought against (not unlike the Native Americans back home), race relations amongst the rest of the tribal descendants versus European descendants is not as rosy. Namibia didn’t gain independence until 1990, before which it was called South West Africa and was under South African rule. This means, for a history lesson, that just as America was on the verge of eradicating racial segregation, South Africa (and what is now Namibia) was segregating in full-force. The apartheid was put into place in 1948 and continued through the early 90’s. While racial segregation was already in place, this was the period when it was actually official public policy. As you can imagine, when it comes to race relations Namibia is about half a century behind us. Everyone lives, shops, and works together peacefully, but that’s about where it ends. At one point I thought I saw a bi-racial couple and thought to myself, “oh maybe the race thing here isn’t what I’m thinking it is,” but it actually turned out to be a black woman and her black-albino partner.

I definitely got the impression that business owners were primarily white and the workers/subordinates were primarily black (I say “subordinates” because in some cases the separation was markedly “upstairs-downstairs”). I was also a little shocked at how freely people would toss around a racial slur or joke or even consider the general non-white population a real threat. While race relations in the US are still not perfect, as an American traveling around I started to get on a little bit of a high horse because we are better than that and where we still struggle we make great efforts to make things better for everyone. Then at one point we were getting gas and the young man pumping our gas asked where we were from and then started asking about the black versus white population, finally admitting that moving to America was his ultimate dream. Now, I am not one of these super-patriot, American-flag-wearing-and-flaunting types. Usually when traveling I do my best to be polite and dispel any of the typical American stereotypes of being pushy, insensitive, or otherwise unapologetically “American.” However, being from the country that’s the international leader in attempting to end racism? That one I’ll take and for the very first time probably ever I genuinely found myself proud to be an American. As much as we sit around at the bar and bitch about politics, the economy, or whatever it is we hate about our lives here, a little appreciation at having been born here, for me anyway, was long overdue.