After  the Quiver Tree Forest, we headed west to Luderitz, a very small, coastal town on the south side of the Namib Desert. As we headed west, the landscape slowly changed from the veldt (dry brush land) to desert and we finally started to see animals other than livestock (and had a few close calls). Unlike many of the world’s deserts, the Namib Desert is a little closer to the storybook version with regular old loose sand in ample supply. As we headed further towards the coast, road signs simply bearing the word “Sand” started to pop up, and we quickly realized it’s because the sand was being blown across the road in proportions that make me wonder how the road doesn’t get plain covered up. (I think they plow it regularly or something.) 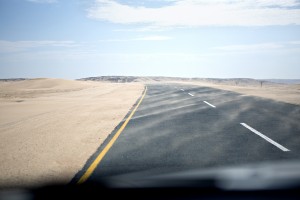 Spanning from the South African border to a little ways north of Luderitz is a national park called the Sperrgebiet, formerly known as Diamond Area 1 due to the diamond mining that was prevalent in the area until they pretty much found all the diamonds. While the mining has subsided and despite the fact that it’s a national park, the area is prohibited to casual visitors; you have to go through an organized tour to see this area (something I did not realize was possible and consider it a missed opportunity). Needless to say we did not stop and go off-roading. 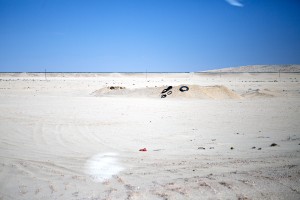 I don’t know why I took a photo of a pile of tires in the middle of the desert. But here it is, the Sperrgebiet.

Finally we made it to Luderitz, a small but charming fishing village that’s claim to fame is mostly an anchor point to Kolmanskop, a popular tourist destination and the only part of the Sperrgebiet that you can drive up and visit without a guided tour. While there is not much to do really in Luderitz besides the Kolmanskop ghost town and maybe start a guided tour up the coast, if I was on a more extended trip I could definitely see wiling away a few afternoons in this laid back town that boasts some pretty excellent seafood. 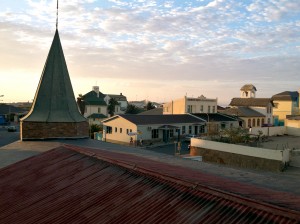 There’s not much more to the city than this, other than the pier area which is not especially exciting, but nice. 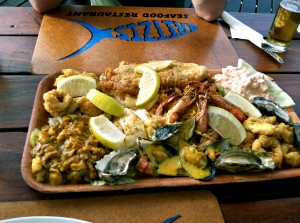 Me and my travelmate split a seafood platter over some beers. Aside from not wanting to eat raw oysters in a foreign country, it was pretty delicious, especially the fish curry and melt-in-your mouth tender calamari.

The following morning we got up bright and early to go visit Kolmanskop, a ghost town that once operated as an old mining town. The distinctive thing about Kolmanskop is that the people moved out and the dunes moved in, filling the old houses and structures with sand. It’s beautiful and a little bit eerie in a way; it provides the reminder that the desert, her shifting sands and the secrets she holds will creep up on you if you stop and sit for too long. This is definitely not the kind of place to get lost and subsequently give up. 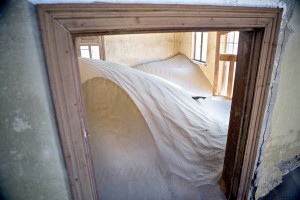 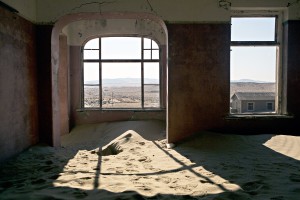 View of the Sperrgebiet from a Kolmanskop abode. I like the footprints on the floor of the room.