When we went over our route with the rental car company and the hunting guide, we got a lot of sighs and murmurings that we were doing a lot of driving. Even one of our guidebooks said that driving from Luderitz to Sossuvlei was too far a trek for one day. What everyone has failed to take into account, however, is that we are American and as Americans we are more than happy to put the pedal to the metal for long periods of time and enjoy it. We are a country of people that jokingly name our computers New York to LA (because it’s a “hard drive”) and we are so married to our cars, we tend to do other things in them besides drive (like listen to audio books, put on make-up, text or play Words with Friends, and of course eat). Mention a long drive to an American and you will get an overwhelmingly positive response to the tune of, “It’s a really great way to see the countryside.” A 6 hour drive on well-maintained gravel roads? Pish posh! The only thing that was keeping us really from driving longer distances in a single day was the fact that it was winter and daylight was limited.

So me and my travel mate embarked on the trek north to Sossuvlei, leaving the beloved paved road after about 20-30 miles. Now, I have road tripped on unpaved roads before, but let me tell you; even the unpaved roads in Namibia are regularly and well maintained. The hardest part is having to drive behind another vehicle, because the dust kicks up so much it’s impossible to see anything. Luckily there are very few other drivers so this is not typically an issue. Since we had a double-sized gas tank, it wasn’t even necessary to fill up at every gas station we happened to pass. The absolute best part about the trek from Luderitz north was the scenery and the animals as we wound our way through Namibia’s back country. As we got closer to the Namib-Nakluft park, it got even more beautiful as we started to see that the sand dunes had seeped into the valleys, seemingly overtaking the mountains. Passing giraffe crossing signs was also pretty rad, though we did not see any in the wild. 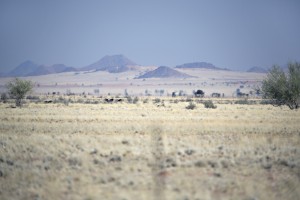 In the distance you can see where the dunes are creeping on the mountains.

On the map, Sesriem looks like a small town when in fact it’s mostly just a stand of guest houses and campsites that serve as the anchor point to head into the area of Namib-Nakluft park with orange sand dunes, commonly referred to as Sossusvlei after one of the distinctive dunes. Apparently Tarsem is quite enchanted with this place, because if you have ever seen The Cell or The Fall you will recognize the flat pans with the striking orange dunes in the background and the dead trees. We arrived to Sesriem around 3 in the afternoon, secured ourself a campsite at the place located inside the park allowing us earlier entrance and decided to head out to see the dunes. What we failed to realize was that the campsite was a full hour drive from the dune area, and everyone was required to be back by 7 pm. This only gave us an hour for the giant dune buggy vans to get us to one of the dunes and to walk out to it, look around, and head back. We were 6 minutes late and got a little talking to by the guy manning the gate, who I might add played very well off the fact that white people are sometimes afraid of large-framed black men with deep voices. (“Why are you late? Did you not know the park closes at 7? Because you are late I won’t get home on time and my family is waiting.” And yeah, I said it. Sometimes white people are unnecessarily afraid of black people. More on race relations in Namibia later.) Of course all of this went down in half-serious jest.

At any rate, that first day we visited Deadvlei, which translates to “dead marsh.” In front of the impressive dune called “Big Poppa” of Deadvlei is a flat expanse of parched land dotted with dead acacia trees which serve to remind us that a river once ran through this area and all it takes is a shift in course to render the landscape dead as dead can be. Regardless, the Tim Burton-esque trees are quite striking against the brightly colored dunes at sunset. 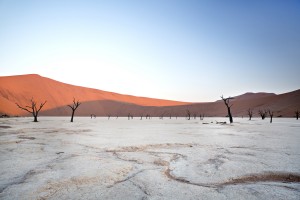 The following morning we trucked it back out to visit Sossuvlei, the picturesque dune called “Big Momma” that adorns the covers of many ‘o travel magazines and guide books. Despite the fact that everyone said “Oh, head out there for sunrise, it’s great, it’s the best time to go,” we get there just after sunrise and the damn sun is on the wrong side of the dune. So, here we are folks, a mediocre photo of Big Momma lit from the less desirable side (not that Big Momma’s ass isn’t beautiful in it’s own right). 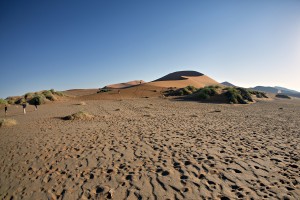