Backpacking Big Bend’s famed Outer Mountain Loop. Is it as difficult as they say?

When we arrived at Big Bend for our backcountry hiking passes, the grizzly park ranger pretty much scared me out of my boots. The Outer Mountain Loop is a 30+ mile hike with 20,000 feet of elevation change, and he made sure we knew it. He also said, in a very foreboding way, that most people don’t finish.

“But I hiked the South Rim yesterday, and I’m not even sore!” I piped, not sure whether I was trying to make him or myself feel better.

“You will be!” he retorted with a jolly guffaw before he warned us to follow the cairns and sent us on our way.

I spent the rest of the day and restless night trying to convince myself that I was not “most people.” 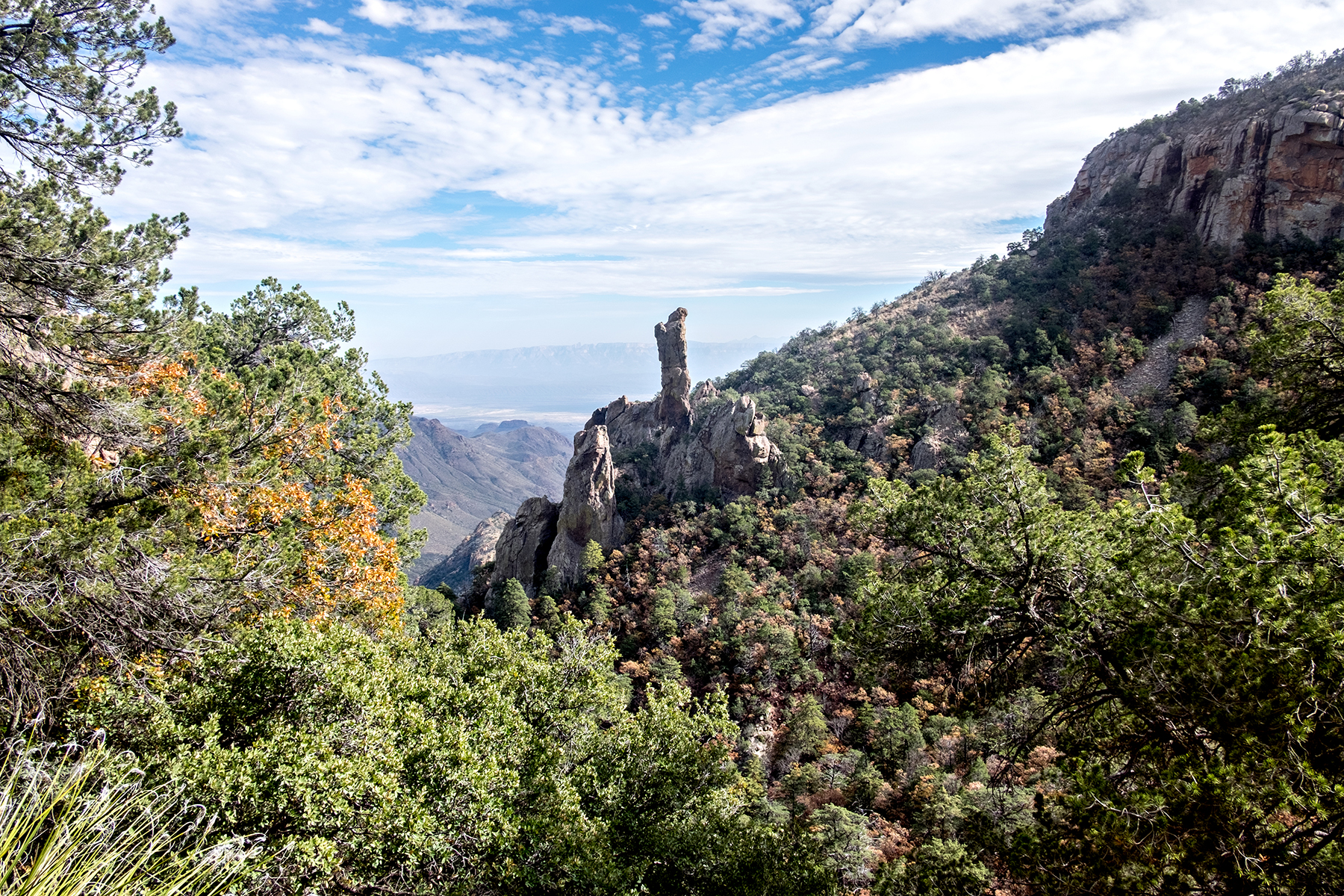 They call this outcropping “the boot” for obvious reasons. I, however, find it looks more like a solo hiker in contemplation.

The Outer Mountain Loop is about a 30-mile circuit starting in the Chisos Basin and connecting the Pinnacles, Juniper Canyon, Dodson, Blue Creek and Laguna Meadows trails. It has a notorious reputation for being difficult. Because the route is strenuous, the park recommends the loop to more experienced hikers.  While it does present certain challenges, it’s a great trip for hiking enthusiasts looking to backpack for the first time. The great part about the Outer Mountain Loop is that you can find ample solitude without being more than a half-day walk from a road or the more popular trails in Chisos Basin.

Half of the reason “most people” don’t finish the route is because at the end of the second day (if you’re hiking clockwise), the bear box where you cache your water is right along a highway. It’s incredibly easy to bail at this point and hitch a ride back to your car. While the Outer Mountain Loop isn’t ideal for inexperienced hikers, it’s a great option for hiking enthusiasts that are new to backpacking. The days are a good length (about 5-7 hours depending on your pace), and you are still pretty close to help if something were to happen, or if you just don’t want to be out there anymore.

If solitude is what you’re looking for, it’s best not to schedule your trip during the holidays. Because we were in Big Bend at its busiest time (between Christmas and New Year’s), we were hiking the loop backward (counter-clockwise) from the way most people go due to the availability of backcountry passes.

(Again, we’re not most people. Right? Right.) However, there is a reason most people go the other way. For starters, that tough second day is slightly easier when you hike East to West. You also face the views hiking East to West. We had to keep turning around to see the Dodson trail panorama. Lastly, it’s extremely steep hiking up Juniper Canyon, rather than hiking down Juniper Canyon. But, as I tend not to give up before I even get started, we set out on the first day.

The lovely thing about hiking the Outer Mountain Loop backward is it makes for a wonderfully comfortable first day. The Laguna Meadows trail up to Blue Creek is a relatively gentle incline, followed by an “all downhill from here” trail until you pass the first water cache and hike up a little bit to find a camping spot. Aside from bending down over a cactus, that first day lulled me into a false sense of security and general badassness.

Despite the weight of a 30-pound pack, about a dozen miles, and the constant on-and-off of jackets and rain gear, I felt great!

We started the Dodson trail on the second day with confidence. The Dodson trail, however, immediately humbled us with a solid half hour of steep climbing. A challenging enough climb that my ridiculously fit husband started to self-talk under his breath. (If she isn’t hurting, I shouldn’t be hurting. I can’t let my wife be better than me at this.  Etc. etc.) As we continued, the trail was a lot of up and down but nothing hard enough to inspire an internal monologue of self-doubt. We felt great. I was taking photos of dewdrops on cacti, and we passed several other hikers. It was New Year’s Eve. Everybody was in good spirits. 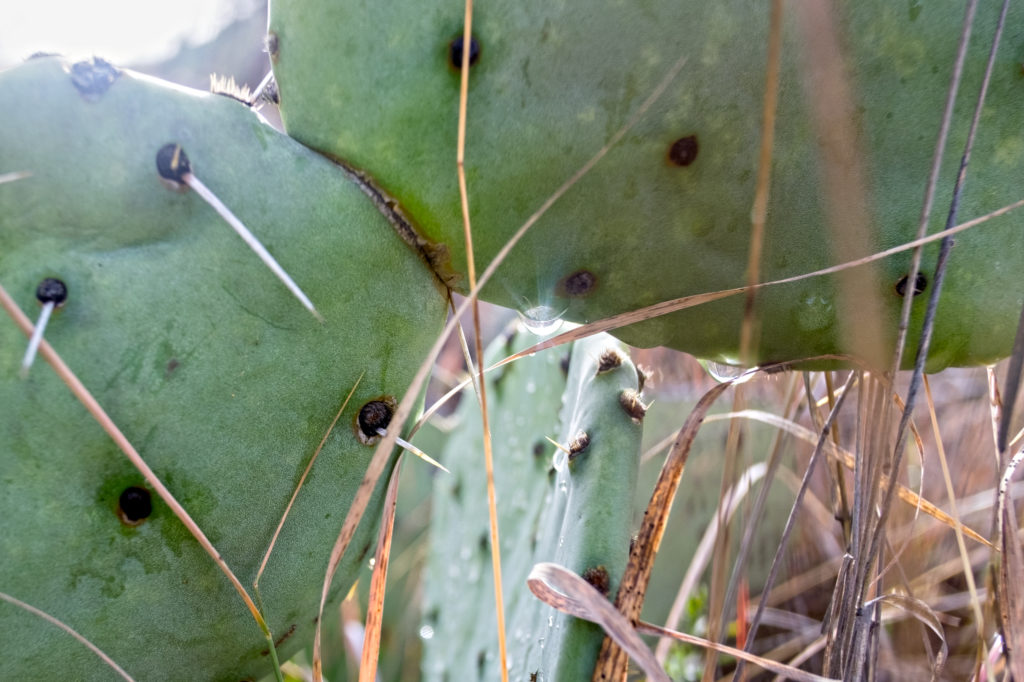 Then I realized my Fitbit was maybe a little bit off on mileage. My Fitbit has been unreliable before, but I kept thinking we were making astounding time, and the water cache would be just over the next hill. Then, more seriously, I started to get hangry from a protein-laden lunch that was decidedly lacking in carbohydrates.

The next thing I know, I’m slamming hiking poles with every step and fantasizing about busting my Fitbit with a rock in a very 2001 epic trail moment. Shortly after that we finally made the water cache and, to our surprise, we met some trail angels! It’s unusual to meet casual day hikers at the Juniper Canyon trailhead. It’s at least an hour’s drive from the main road on rocky dirt roads; some vehicle clearance is necessary, and the park recommends a vehicle with 4WD for unpaved roads. Many people don’t even cache water here because it’s such a pain to get to. But nonetheless, this lovely couple from Austin came back from their day hike as we approached. We chatted about the hike and the beauty of the park. They took some of our trash and gave us a little something to even out my blood sugar – beer! Oh, sweet holy carbs in a can.

It took us about another 90 minutes to find our campsite and, despite having adequate blood sugar levels, I was pretty tapped out. I think we slept for 10 hours. The sleep may have been fitful, but at least it was long. I woke up around 11 pm and wanted to crawl out of the tent to look at the stars, but I couldn’t on account of my throbbing legs. How was I even going to finish this hike? I see how most people are inclined to give up. Suddenly I’m left wondering if the park ranger’s parting laugh was more sinister than jolly. 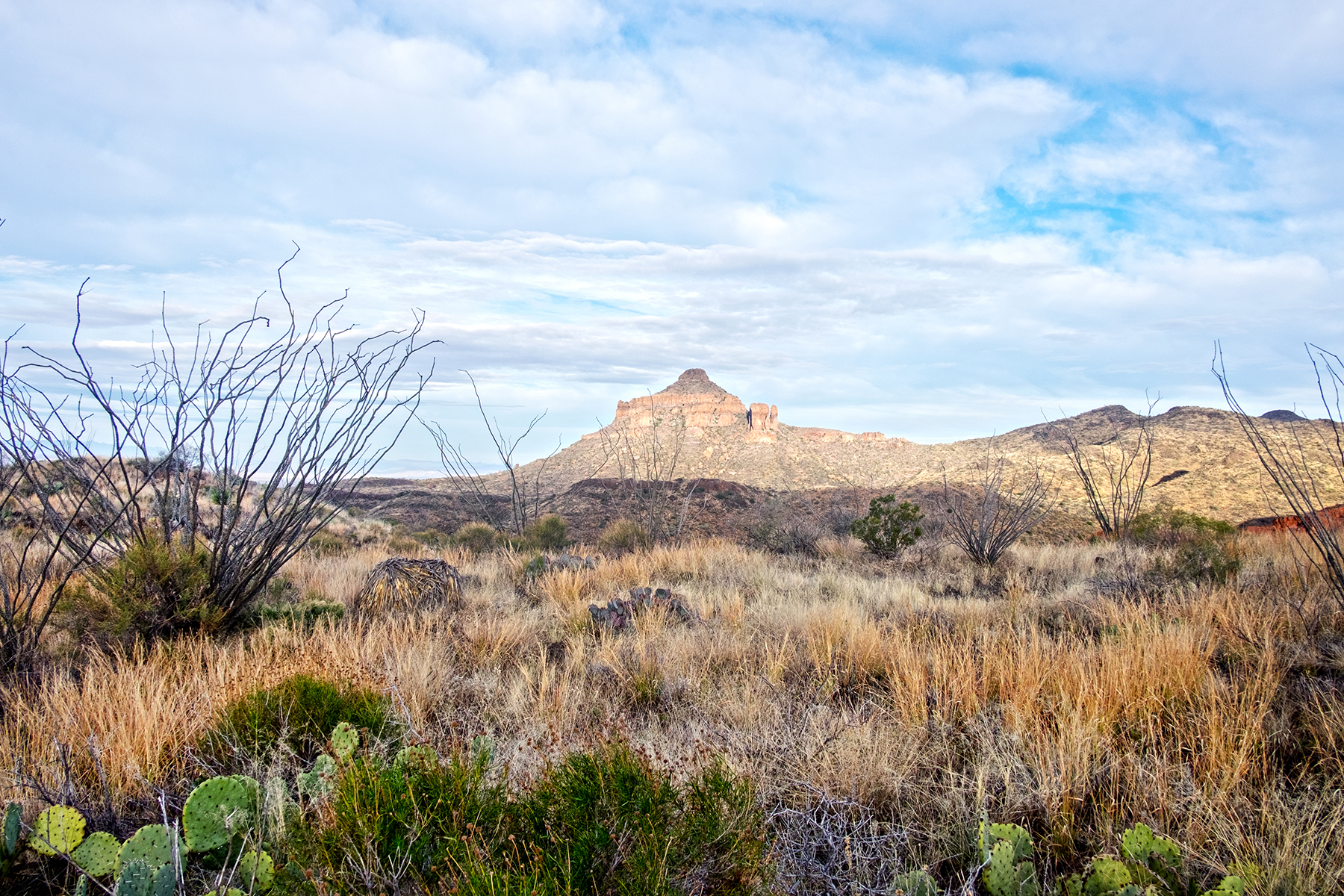 This was the view from our campsite on the Dodson Trail.

A few nights before our backpacking excursion, my sister-in-law and her husband were camping with us. We saw a ton of shooting stars under the clear night sky. We talked about wishes, but neither of us could think of any particular shooting star-worthy wishes. Now, my life is not without any struggle. But for once I thought, “Just let what’s gonna happen, happen.” If you don’t like where you are in life, then get up and move. You are not a tree.

The next morning on the trail we woke up well before 6 am to get a head start on the cooler part of the day. Again, we saw Big Bend’s famous blanket of stars as we set off. I was tired and sore and stressing about the hardest part of the hike that was still to come, a 2800+ foot climb over about 6 miles. But somehow starting the new year off with a cup of instant coffee under the stars made all that go away. Again, I saw a shooting star. This time, I wished for world peace.

That last climb out of Juniper Canyon was challenging but had beautiful mountain foliage to contrast the desert terrain we’d been hiking through up to this point. Then the climb… ended. Quietly. One second we were cursing our boots/poles/Fitbits/mothers, the next we were walking a gentle path. No signs, no finish line, no pomp and circumstance. I guess that’s how most difficulties in life pass; as lightly as a fart in the wind.

As a runner, I’m used to a finish line. A smiling face, a high-five, a medal and a free beer. None of that was at the end of the Outer Mountain Loop. In fact, being a loop, it ended just how it began: at the trailhead. All that awaited me was a public toilet and a double gin and tonic at the park’s bar.

As much as that park ranger rattled my confidence going into the three-day excursion, I realized that it’s his job to make sure visitors are aware of the challenges so that they stay safe on the trail. The lack of available water sources can create a dangerous situation for a lost hiker.

My final takeaway is to know thyself. If you hate hiking, don’t do it. If you love hiking but have a lackluster cardio routine, hike for three nights instead of two. If you have bad knees or a bad back, think twice about the physical commitment. We saw people of just about every level of fitness on the trail, from twin brothers running the whole thing in one day to hikers, old and young, taking a more casual approach. After all the mental and physical anguish, it turns out I’m no different than “most people.” I just didn’t quit. 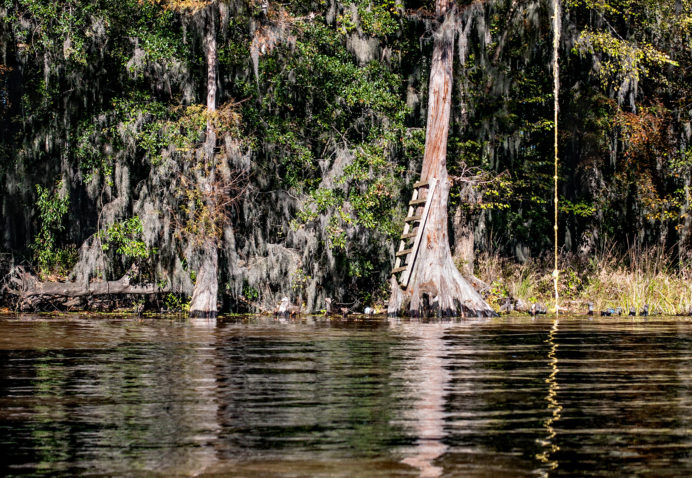 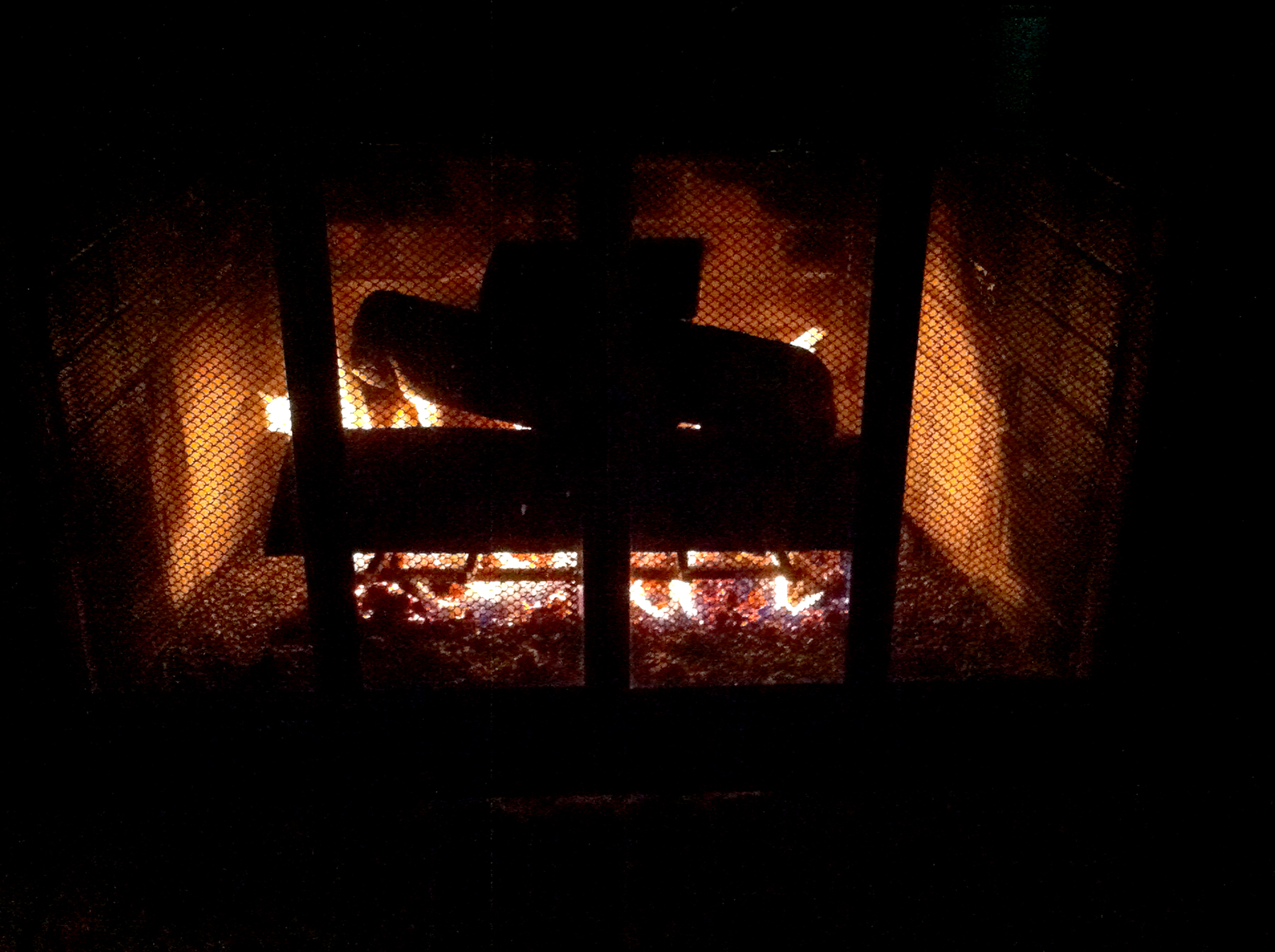